Psychology Wiki
Register
Don't have an account?
Sign In
Advertisement
in: Pages with broken file links, Glands of mouth, Saliva

The parotid gland is a major salivary gland in humans. It is a bilateral structure, and the largest of the salivary glands. It is wrapped around the mandibular ramus, and secretes saliva through Stensen duct (or parotid duct) into the oral cavity, to facilitate mastication and swallowing and to begin the digestion of starches. The word 'parotid' (paraotic) literally means around the ear.

The parotid salivary glands appear early in the sixth week of prenatal development and are the first major salivary glands formed. The epithelial buds of these glands are located on the inner part of the cheek, near the labial commissures of the primitive mouth. These buds will grow posteriorly toward the otic placodes of the ears and branch to form solid cords with rounded terminal ends near the developing facial nerve. Later, at approximately 10 weeks of prenatal development, these cords are canalized and form ducts, with the largest becoming the parotid duct for the parotid gland. The rounded terminal ends of the cords form the acini of the glands. Secretion by the parotid glands via the parotid duct begins at approximately 18 weeks of gestation. Again, the supporting connective tissue of the gland develops from the surrounding mesenchyme.[1]

The parotid duct or Stenson duct is a long excretory duct that emerges from the anterior border of the gland, superfcial to the masseter muscle. The duct pierces the buccinator muscle, then opening up into the oral cavity on the inner surface of the cheek, usually opposite the maxillary second molar. The parotid papilla is a small elevation of tissue that marks the opening of the parotid duct on the inner surface of the cheek.[4]

The gland has a capsule of its own of dense connective tissue but is also provided with a false capsule by investing layer of deep cervical fascia. The fascia at the imaginary line between the angle of mandible and mastoid process splits into the superficial lamina and a deep lamina to enclose the gland. Risorius is a small muscle embedded with this capsules substance.

Even though the parotid gland is the largest, provides only 25% of the total salivary volume. The serous cell predominates in the parotid, making the gland secrete a mainly serous secretory product.[1]

The parotid gland also secretes salivary alpha-amylase (sAA) which is the first step in the decomposition of starches during mastication. It is the main exocrine gland to secrete this. It breaks down amylose (straight chain starch) and amylopectin (branched starch) by hydrolyzing alpha 1,4 bonds. Additionally, sAA has been suggested to prevent bacterial attachment to oral surfaces and to enable bacterial clearance from the mouth.[6]

Relation to other structures

(1) Superficial or lateral relations: The gland is related superficially to the skin. Superficial fascia, superficial lamina of investing layer of deep cervical fascia and Great auricular nerve (anterior ramus of C2 and C3)

(4) Medial relations: The parotid gland comes into contact with the superior pharyngyeal constrictor muscle at the medial border where the anteromedial and posteromedial surfaces meet. Hence there is a need to examine the fauces in parotitis.

Structures that pass through the gland

The gland is mainly irrigated by External Carotid artery via the posterior auricular artery and the transverse facial.

Venous return is to the Retromandibular vein.

The gland is mainly drained into the preauricular or parotid lymph nodes which ultimately drain to the deep cervical chain.

Innervation is entirely autonomic. Postganglionic sympathetic fibers from superior cervical sympathetic ganglion reach the gland as periarterial nerve plexuses around the external carotid artery and their function is mainly vasoconstriction. The cell bodies of the preganglionic sympathetics usually lie in the lateral horns of upper thoracic spinal segments. Preganglionic parasympathetic fibers leave the brain stem from inferior salivatory nucleus in the glossopharyngeal nerve (cranial nerve IX) and then through its tympanic and then the lesser petrosal branch pass into the otic ganglion. There, they synapse with postganglionic fibers which reach the gland by hitch-hiking via the auriculotemporal nerve, a branch of the mandibular nerve. [7] [8]

Parotid gland salivation is ultimately caused by the glossopharyngeal nerve.

Inflammation of one or both parotid glands is known as parotitis. The most common cause of parotitis is mumps. Widespread vaccination against mumps has markedly reduced the incidence of mumps parotitis. The pain of mumps is due to the swelling of the gland wlithin its fibrous capsule (see histology).[2]

Apart from viral infection, other infections such as bacterial infections can cause parotitis (acute suppurative parotitis or chronic parotiti) as may blockage of the duct, whether from salivary duct calculi or external compression. Parotid gland swellings can also be due to benign lymphoepithelial lesions caused by Mikulicz disease and Sjögren syndrome. Swelling of the parotid gland may also indicate the eating disorder bulimia nervosa, creating the look of a heavy jaw line. With the inflammation of mumps or obstruction of the ducts (see salivary stones discussion below), the sAA is deposited in the blood stream, raising sAA levels.

Tuberculosis and syphilis can cause granuloma formation in the parotid glands.

Salivary stones mainly occur within the main confluence of the ducts and within the main parotid duct. The patient usually complains of intense pain when salivating and tends to avoid foods which produce this symptom. In addition, the parotid gland may become enlarged upon trying to eat. The pain can be reproduced in clinic by squirting lemon juice into the mouth. Surgery depends upon the site of the stone: if within the anterior aspect of the duct a simple incision into the buccal mucosa with sphinterotomy may allow removal; however, if situated more posteriorly within the main duct, complete gland excision may be necessary.

Eighty to eighty-five percent of tumors of the parotid gland are benign.[10] The most common of these include pleomorphic adenoma (70% of tumors,[10] affecting predominantly females (60%[10])) and Warthin tumor (i.e. adenolymphoma)more in males than in females. Their importance is in relation to their anatomical position and tendency to grow over time. The tumorous growth can also change the consistency of the gland and cause facial pain on the involved side since the facial nerve travels through the gland.[11]

Fifteen to twenty percent of parotid tumors are malignant with the most common tumors being mucoepidermoid carcinoma and adenoid cystic carcinoma. Other malignant tumours of the parotid gland include actinic cell carcinoma, carcinoma ex-pleomorphic adenoma, adenocarcinoma (arising from ductal epithelium of parotid gland), squamous cell carcinoma (arising from parenchyma of parotid gland) and undifferentiated carcinoma. Critically, the relationship of the tumor to the branches of the facial nerve (CN VII) must be defined because resection may damage the nerves, resulting in paralysis of the muscles of facial expression.

Surgical treatment of parotid gland tumors is sometimes difficult because of the anatomical relations of the facial nerve parotid lodge, as well as the increased potential for postoperative relapse. Thus, detection of early stages of a parotid tumor is extremely important in terms of postoperative prognosis.[10] Operative technique is laborious, because of relapses and incomplete previous treatment made in other border specialties.[10] 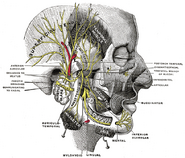 Mandibular division of the trifacial nerve.

Sympathetic connections of the otic and superior cervical ganglia.

Horizontal section through left ear; upper half of section.