Psychology Wiki
Register
Don't have an account?
Sign In
Advertisement
in: Pages with broken file links, Articles to be expanded, Developmental biology,
and 2 more

The placenta is an ephemeral organ present in placental vertebrates. The term placenta comes from the Latin for cake, from Greek plakoenta, accusative of plakoeis - πλακοείς, "flat"[1][2], referring to its appearance in humans. Protherial (egg-laying) and metatherial (marsupial) mammals do not produce a placenta (false, marsupials have a choriovitelline placenta) The placenta develops from the same sperm and egg cells that form the fetus, and functions as a foetomaternal organ with two components, the foetal part (Chorion frondosum), and the maternal part (Decidua basalis).

In humans, the placenta averages 22 cm (9 in.) in length and 2-2.5 cm (0.8-1 in.) in thickness. It typically weighs approximately 500 grams (1 lb). It has a dark reddish/blue or maroon color. It connects to the fetus by an umbilical cord of approximately 55-60 cm (22-24 in.) in length that contains two arteries and one vein.[3] The umbilical cord inserts into the chorionic plate. Vessels branch out over the surface of the placenta and further divide to form a network covered by a thin layer of cells. This results in the formation of villous tree structures. On the maternal side, these villous tree structures are grouped into lobules called cotelydons. In humans the placenta usually has a disc shape but different mammalian species have widely varying shapes.[4]

The placenta grows throughout pregnancy. Development of the maternal blood supply to the placenta is suggested to be complete by the end of the first trimester of pregnancy (approximately 12-13 weeks).

In preparation for implantation, the uterine endometrium undergoes 'decidualisation'. Spiral arteries in the decidua are remodelled so that they become less convoluted and their diameter is increased. This increases maternal blood flow to the placenta and also decreases resistance so that shear stress is reduced. The relatively high pressure as the maternal blood enters the intervillous space through these spiral arteries bathes the villi in blood. An exchange of gases takes place. As the pressure decreases, the deoxygenated blood flows back through the endometrial veins.

Deoxygenated fetal blood passes through umbilical arteries to the placenta. At the junction of umbilical cord and placenta, the umbilical arteries branch radially to form chorionic arteries. Chorionic arteries also branch before they enter into the villi. In the villi, they form an extensive arteriocapillary venous system, bringing the fetal blood extremely close to the maternal blood; but no intermingling of fetal and maternal blood occurs ("placental barrier"[5]).

In addition to the transfer of gases and nutrients, the placenta also has metabolic and endocrine activity. It produces, among other hormones, progesterone, which is important in maintaining the pregnancy; somatomammotropin (also known as placental lactogen), which acts to increase the amount of glucose and lipids in the maternal blood; estrogen; relaxin, and beta human chorionic gonadotrophin (beta-hCG). This results in increased transfer of these nutrients to the fetus and is also the main cause of the increased blood sugar levels seen in pregnancy. This hormone (beta-hCG) ensures that progesterone and oestrogen are secreted; progesterone and oestrogen thicken and maintain the uterine lining as well as inhibit the production and release of more eggs. However after about 2 months the placenta takes on the role of producing progesterone and therefore beta-hCG is no longer needed. Beta-hCG is excreted in urine and this is what pregnancy tests detect. It also produces insulin-like growth factors (IGFs).

Cloaking from immune system of mother

To hide itself from attack by the mother's immune system, the placenta secretes Neurokinin B containing phosphocholine molecules. This is the same mechanism used by parasitic nematodes to avoid detection by the immune system of their host.[6]

When the fetus is born, its placenta begins a physiological separation for spontaneous expulsion afterwards (and for this reason is also called the afterbirth). In humans, the umbilical cord is routinely clamped and severed prior to the delivery of the placenta, often within seconds or minutes of birth, a medical protocol known as 'active management of third stage' which has been called into question by advocates of natural birth and 'passive management of third stage'[7] The site of the former umbilical cord attachment in the center of the front of the abdomen is known as the umbilicus, navel, or belly-button.

Modern obstetric practice has decreased maternal death rates enormously. The addition of active management of the third stage of labor is a major contributor towards this. It involves giving oxytocin via IM injection, followed by cord traction to assist in delivering the placenta. Premature cord traction can pull the placenta before it has naturally detached from the uterine wall, resulting in hemorrhage. The BMJ summarized the Cochrane group metanalysis (2000) of the benefits of active third stage as follows:

"One systematic review found that active management of the third stage of labour, consisting of controlled cord traction, early cord clamping plus drainage, and a prophylactic oxytocic agent, reduced postpartum haemorrhage of 500 or 1000 mL or greater and related morbidities including mean blood loss, postpartum haemoglobin less than 9 g/dL, blood transfusion, need for supplemental iron postpartum, and length of third stage of labour. Although active management increased adverse effects such as nausea, vomiting, and headache, one RCT identified by the review found that women were less likely to be dissatisfied when their third stage of labour was actively managed."[3]

Risks of retained placenta include hemorrhage and infection. If the placenta fails to deliver in 30 minutes in a hospital environment, manual extraction may be required if heavy ongoing bleeding occurs, and very rarely a curettage is necessary to ensure that no remnants of the placenta remain (in rare conditions with very adherent placenta (placenta accreta)). However, in birth centers and attended home birth environments, it is common for licensed care providers to wait for the placenta's birth up to 2 hours in some instances.

In most mammalian species, the mother bites through the cord and consumes the placenta, primarily for the benefit of prostaglandin on the uterus after birth. This is known as placentophagy. However, it has been observed in zoology that chimpanzees, with which humans share 99% of genetic material, apply themselves to nurturing their offspring, and keep the fetus, cord, and placenta intact until the cord dries and detaches the next day.

The placena exists in most mammals and some reptiles. It is probably polyphyletic.

The placenta often plays an important role in various human cultures, with many societies conducting rituals regarding its disposal. In the Western world, the placenta is most often incinerated.[8]

Some cultures bury the placenta for various reasons. The Māori of New Zealand traditionally bury the placenta from a newborn child to emphasize the relationship between humans and the earth.[9] Similarly, the Navajo bury the placenta and umbilical cord at a specially-chosen site,[10] particularly if the baby dies during birth.[11] In Cambodia and Costa Rica, burial of the placenta is believed to protect and ensure the health of the baby and the mother.[12] If a mother dies in childbirth, the Aymara of Bolivia bury the placenta in a secret place so that the mother's spirit will not return to claim her baby's life.[13]

The placenta is believed by some communities to have power over the lives of the baby or its parents. The Kwakiutl of British Columbia bury girls' placentas to give the girl skill in digging clams, and expose boys' placentas to ravens to encourage future prophetic visions. In Turkey, the proper disposal of the placenta and umbilical cord is believed to promote devoutness in the child later in life. In Ukraine, Transylvania, and Japan, interaction with a disposed placenta is thought to influence the parents' future fertility. The ancient Egyptians believed that the placenta was imbued with magical powers.[12] In fact, the placenta of the pharaoh was placed on a pole and carried into battle. This is history's first flag. <http://www.psychohistory.com/htm/eln04f_footnotestrauma.html> 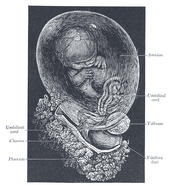