Prospect theory is a behavioral economic theory that describes decisions between alternatives that involve risk, where the probabilities of outcomes are known. The theory says that people make decisions based on the potential value of losses and gains rather than the final outcome, and that people evaluate these losses and gains using interesting heuristics.

The model is descriptive: it tries to model real-life choices, rather than optimal decisions. The paper "Prospect Theory: An Analysis of Decision under Risk" has been called a "seminal paper in behavioral economics".[1]

The theory was developed by Daniel Kahneman, a professor at Princeton University's Department of Psychology, and Amos Tversky in 1979 as a psychologically more accurate description of preferences compared to expected utility theory. It describes how people choose between probabilistic alternatives and evaluate potential losses and gains. In the original formulation the term prospect referred to a lottery[citation needed]. 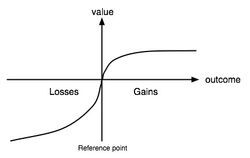 The theory describes the decision processes in two stages, editing and evaluation. In the first, outcomes of the decision are ordered following some heuristic. In particular, people decide which outcomes they see as basically identical, set a reference point and then consider lesser outcomes as losses and greater ones as gains. In the following evaluation phase, people behave as if they would compute a value (utility), based on the potential outcomes and their respective probabilities, and then choose the alternative having a higher utility.

is the overall or expected utility of the outcomes to the individual making the decision,

are the potential outcomes and

is a so-called value function that assigns a value to an outcome. The value function (sketched in the Figure) that passes through the reference point is s-shaped and asymmetrical. Losses hurt more than gains feel good (loss aversion). This differs greatly from expected utility theory, in which a rational agent is indifferent to the reference point. In expected utility theory, the individual only cares about absolute wealth, not relative wealth in any given situation. The function

is a probability weighting function and expresses that people tend to overreact to small probability events, but underreact to medium and large probabilities.

To see how Prospect Theory (PT) can be applied in an example, consider the decision to buy insurance. Assuming the probability of the insured risk is 1%, the potential loss is $1,000 and the premium is $15. If we apply PT, we first need to set a reference point. This could be the current wealth or the worst case (losing $1,000). If we set the frame to the current wealth, the decision would be either to

These expressions can be computed numerically. For typical value and weighting functions, the latter expression could be larger due to the convexity of

in losses, and hence the insurance looks unattractive. If we set the frame to −$1,000, both alternatives are set in gains. The concavity of the value function in gains can then lead to a preference for buying the insurance.

In this example, a strong overweighting of small probabilities can also undo the effect of the convexity of

in losses: the potential outcome of losing $1,000 is overweighted.

Some behaviors observed in economics, like the disposition effect or the reversing of risk aversion/risk seeking in case of gains or losses (termed the reflection effect), can also be explained by referring to the prospect theory.

The pseudocertainty effect is the observation that people may be risk-averse or risk-acceptant depending on the amounts involved and on whether the gamble relates to becoming better off or worse off. This is a possible explanation for why the same person may buy both an insurance policy and a lottery ticket.

An important implication of prospect theory is that the way economic agents subjectively frame an outcome or transaction in their mind affects the utility they expect or receive. This aspect has been widely used in behavioral economics and mental accounting. Framing and prospect theory has been applied to a diverse range of situations which appear inconsistent with standard economic rationality: the equity premium puzzle, the excess returns puzzle and long swings/PPP puzzle of exchange rates through the endogenous prospect theory of Imperfect Knowledge Economics, the status quo bias, various gambling and betting puzzles, intertemporal consumption, and the endowment effect.

Another possible implication for economics is that utility might be reference based, in contrast with additive utility functions underlying much of neo-classical economics. This means people consider not only the value they receive, but also the value received by others. This hypothesis is consistent with psychological research into happiness, which finds subjective measures of wellbeing are relatively stable over time, even in the face of large increases in the standard of living (Easterlin, 1974; Frank, 1997).

Military historian John A. Lynn argues that prospect theory provides an intriguing if not completely verifiable framework of analysis for understanding Louis XIV's foreign policy nearer to the end of his reign (Lynn, pp. 43–44).

The original version of prospect theory gave rise to violations of first-order stochastic dominance. That is, prospect A might be preferred to prospect B even if the probability of receiving a value x or greater is at least as high under prospect B as it is under prospect A for all values of x, and is greater for some value of x. Later theoretical improvements overcame this problem, but at the cost of introducing intransitivity in preferences. A revised version, called cumulative prospect theory overcame this problem by using a probability weighting function derived from Rank-dependent expected utility theory. Cumulative prospect theory can also be used for infinitely many or even continuous outcomes (for example, if the outcome can be any real number).