The anterior or ventral portion of the medulla oblongata is named the pyramid and lies between the anterior median fissure and the antero-lateral sulcus.

Its upper end is slightly constricted, and between it and the pons the fibers of the abducent nerve emerge; a little below the pons it becomes enlarged and prominent, and finally tapers into the anterior funiculus of the medulla spinalis, with which, at first sight, it appears to be directly continuous. 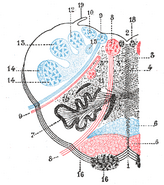 The formatio reticularis of the medulla oblongata, shown by a transverse section passing through the middle of the olive.