Consider rolling a ball up a hill. If the ball is not given enough velocity, then it will not roll over the hill. This scenario makes sense from the standpoint of classical mechanics, but is an inapplicable restriction in quantum mechanics simply because quantum mechanical objects do not behave like classical objects such as balls. On a quantum scale, objects exhibit wavelike behavior. For a quantum particle moving against a potential energy "hill", the wave function describing the particle can extend to the other side of the hill. This wave represents the probability of finding the particle in a certain location, meaning that the particle has the possibility of being detected on the other side of the hill. This behavior is called tunnelling; it is as if the particle has 'dug' through the potential hill.

As this is a quantum and non-classical effect, it can generally only be seen in nanoscopic phenomena — where the wave behavior of particles is more pronounced.

Availability of states is necessary for tunneling to occur. In the above example, the quantum mechanical ball will not appear inside the hill because there is no available "space" for it to exist, but it can tunnel to the other side of the hill, where there is free space. Analogously, a particle can tunnel through the barrier, but unless there are states available within the barrier, the particle can only tunnel to the other side of the barrier. The wavefunction describing a particle only expresses the probability of finding the particle at a location assuming a free state exists.

In the early 1900s, radioactive materials were known to have characteristic exponential decay rates or half lives. At the same time, radiation emissions were known to have certain characteristic energies. By 1928, George Gamow had solved the theory of the alpha decay of a nucleus via tunnelling. Classically, the particle is confined to the nucleus because of the high energy requirement to escape the very strong potential. Under this system, it takes an enormous amount of energy to pull apart the nucleus. In quantum mechanics, however, there is a probability the particle can tunnel through the potential and escape. Gamow solved a model potential for the nucleus and derived a relationship between the half-life of the particle and the energy of the emission.

Alpha decay via tunnelling was also solved concurrently by Ronald Gurney and Edward Condon. Shortly thereafter, both groups considered whether particles could also tunnel into the nucleus.

After attending a seminar by Gamow, Max Born recognized the generality of quantum-mechanical tunnelling. He realised that the tunnelling phenomenon was not restricted to nuclear physics, but was a general result of quantum mechanics that applies to many different systems. Today the theory of tunnelling is even applied to the early cosmology of the universe.

Quantum tunnelling was later applied to other situations, such as the cold emission of electrons, and perhaps most importantly semiconductor and superconductor physics. Phenomena such as field emission, important to flash memory, are explained by quantum tunnelling. Tunnelling is a source of major current leakage in Very-large-scale integration (VLSI) electronics, and results in the substantial power drain and heating effects that plague high-speed and mobile technology.

Very recently it has been found that quantum tunneling may be the mechanism used by enzymes to speed up reactions in lifeforms to millions of times their normal speed[1].

Let us consider the time-independent Schrödinger equation for one particle, in one dimension, under the influence of a hill potential

as the exponential of a function.

into real and imaginary parts using real valued v functions A and B.

because the pure imaginary part needs to vanish due to the real-valued right-hand side:

Next we want to take the semiclassical approximation to solve this. That means we expand each function as a power series in

. From the equations we can already see that the power series must start with at least an order of

to satisfy the real part of the equation. But as we want a good classical limit, we also want to start with as high a power of Planck's constant as possible.

The constraints on the lowest order terms are as follows.

If the amplitude varies slowly as compared to the phase, we set

Which is obviously only valid when you have more energy than potential - classical motion. After the same procedure on the next order of the expansion we get

On the other hand, if the phase varies slowly as compared to the amplitude, we set

Which is obviously only valid when you have more potential than energy - tunnelling motion. Grinding out the next order of the expansion yields

It is apparent from the denominator, that both these approximate solutions are bad near the classical turning point

In a specific tunnelling problem, we might already suspect that the transition amplitude be proportional to

and thus the tunnelling be exponentially dampened by large deviations from classically permitable motion.

. Now because we are near

, we can easily expand

in a power series.

Let us only approximate to linear order

This differential equation looks deceptively simple. It takes some trickery to transform this into a Bessel equation. The solution is as follows.

Fortunately the Bessel function solutions will asymptote into sine, cosine and exponential functions in the proper limits. The relationship can be found as follows.

, for a particle tunnelling through a single potential barrier is found to be

are the 2 classical turning points for the potential barrier. If we take the classical limit of all other physical parameters much larger than Planck's constant, abbreviated as

, we see that the transmission coefficient correctly goes to zero. This classical limit would have failed in the unphysical, but much simpler to solve, situation of a square potential. 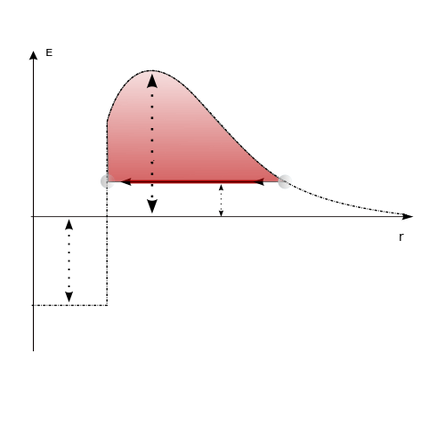