Robust statistics provides an alternative approach to classical statistical methods. The motivation is to produce estimators that are not unduly affected by small departures from model assumptions

In statistics, classical methods rely heavily on assumptions which are often not met in practice. In particular, it is often assumed that the data are normally distributed, at least approximately, or that the central limit theorem can be relied on to produce normally distributed estimates. Unfortunately, when there are outliers in the data, classical methods often have very poor performance. Robust statistics seeks to provide methods that emulate classical methods, but which are not unduly affected by outliers or other small departures from model assumptions.

In order to quantify the robustness of a method, it is necessary to define some measures of robustness. Perhaps the most common of these are the breakdown point and the influence function, described below.

Good books on robust statistics include those by Huber (1981), Hampel et al (1986) and Rousseeuw and Leroy (1987). A modern treatment is given by Maronna et al (2006). Huber's book is quite theoretical, whereas the book by Rousseew and Leroy is very practical (although the sections discussing software are rather out of date, the bulk of the book is still very relevant). Hampel et al (1987) and Maronna et al (2006) fall somewhere in the middle ground. All four of these are recommended reading, though Maronna et al is the most up to date.

Gelman et al in Bayesian Data Analysis (2004) consider a data set relating to speed of light measurements made by Simon Newcomb. The data sets for that book can be found via the Classic data sets page, and the book's website contains more information on the data.

The plot below shows a density plot of the speed of light data, together with a rug plot (panel (a)). Also shown is a normal QQ-plot (panel (b)). The outliers are clearly visible in these plots.

Panels (c) and (d) of the plot show the bootstrap distribution of the mean (c) and the 10% trimmed mean (d). The trimmed mean is a simple robust estimator of location that deletes a certain percentage of observations (10% here) from each end of the data, then computes the mean in the usual way. The analysis was performed in R and 10 000 bootstrap samples were used for each of the raw and trimmed means. 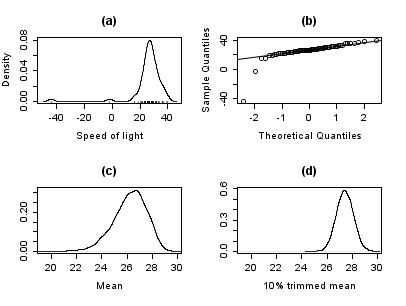 Robust statistical methods, of which the trimmed mean is a simple example, seek to outperform classical statistical methods in the presence of outliers, or, more generally, when underlying parametric assumptions are not quite correct.

Whilst the trimmed mean performs well relative to the mean in this example, better robust estimates are available. In fact, the mean, median and trimmed mean are all special cases of M-estimators. Details appear in the sections below.

The outliers in the speed of light data do not just have an adverse effect on the mean. The usual estimate of scale is the standard deviation, and this quantity is even more badly affected by outliers because the squares of the deviations from the mean go into the calcuation, so the outliers' effects are exacerbated. 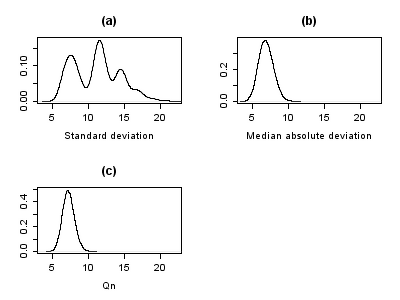 The distribution of standard deviation is erratic and wide, a result of the outliers. The MAD is better behaved, and Qn is a little bit more efficient than MAD. This simple example demonstrates that when outliers are present, the standard deviation cannot be recommended as an estimate of scale.

Traditionally, statisticians would manually screen data for outliers, and remove them, usually checking the source of the data to see if the outliers were erroneously recorded. Indeed, in the speed of light example above, it is easy to see and remove the two outliers prior to proceeding with any further analysis. However, in modern times, data sets often consist of large numbers of variables being measured on large numbers of experimental units. As such, manual screening for outliers is impractical.

This problem of masking gets worse as the complexity of the data increases. For example, in regression problems, diagnostic plots are used to identify outliers. However, it is common that once a few outliers have been removed, others become visible. The problem is even worse in higher dimensions.

The basic tools used to describe and measure robustness are, the breakdown point', the 'influence function and the sensitivity curve.

and the corresponding realizations

to estimate the mean. Such an estimator has a breakdown point of 0 because we can make

arbitrarily large just by changing any of

In the speed of light example, removing the two lowest observations causes the mean to change from 26.2 to 27.75, a change of 1.55. The estimate of scale produced by the Qn method is 6.3. Intuitively, we can divide this by the square root of the sample size to get a robust standard error, and we find this quantity to be 0.78. Thus, the change in the mean resulting from removing two outliers is approximately twice the robust standard error.

The 10% trimmed mean for the speed of light data is 27.43. Removing the two lowest observations and recomputing gives 27.67. Clearly, the trimmed mean is less affected by the outliers and has a higher breakdown point.

Notice that if we replace the lowest observation, -44, by -1000, the mean becomes 11.73, whereas the 10% trimmed mean is still 27.43. In many areas of applied statistics, it is common for data to be log-transformed to make them near symmetrical. Very small values become large negative when log-transformed, and zeroes become negatively infinite. Therefore, this example is of practical interest. 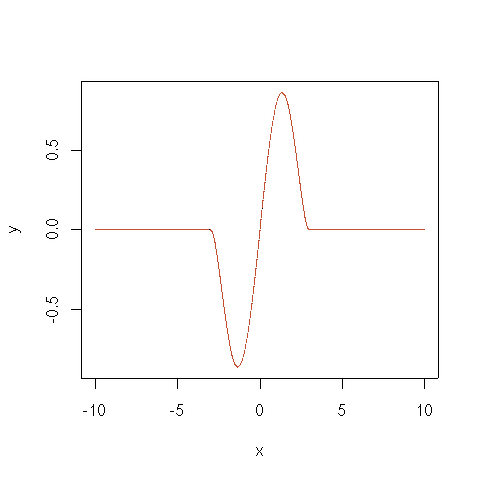 The context is the following:

The definition of an empirical influence function is: Let

is a sample from these variables.

is an estimator. Let

What this actually means is that we are replacing the i-th value in the sample by an arbitrary value and looking at the output of the estimator.

. We want to estimate the parameter

be the asymptotic value of some estimator sequence

. We will suppose that this functional is Fisher consistent, i.e.

. this means that at the model

be some distribution in

. What happens when the data doesn't follow the model

exactly but another, slightly different, "going towards"

which is the directional derivative of

, in the direction of

is the probability measure which gives mass 1 to

. The influence function is then defined by:

It describes the effect of an infinitesimal contamination at the point

on the estimate we are seeking, standardized by the mass

Properties of an influence function which bestow it with desirable performance are:

This value, which looks a lot like a Lipschitz constant, represents the effect of shifting an observation slightly from

to a neighbouring point

, i.e. add an observation at

and remove one at

(The mathematical context of this paragraph is given in the section on empirical influence functions.)

Historically, several approaches to robust estimation were proposed, including R-estimators and L-estimators. However, M-estimators now appear to dominate the field as a result of their generality, high breakdown point, and their efficiency. See Huber (1981).

M-estimators are a generalization of maximum likelihood estimators (MLEs). What we try to do with MLE's is to maximize

. In 1964, Huber proposed to generalize this to the minimization of

is some function. MLE are therefore a special case of M-estimators (hence the name: "Maximum likelihood type" estimators).

can often be done by differentiating

has a derivative, that is.

have been proposed. The two figures below show four 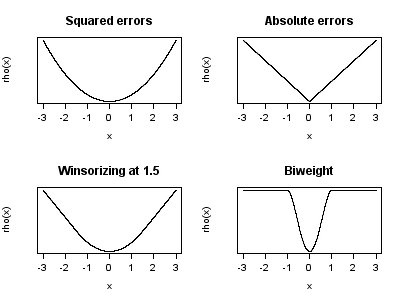 increases at an accelerating rate, whilst for absolute errors, it increases at a constant rate. When Windsorizing is used, a mixtue of these two effects is introduced: for small values of x,

increases at the squared rate, but once the chosen threshold is reached (1.5 in this example), the rate of increase becomes constant.

Tukey's biweight (also known as bisquare) function behaves in a similar way to the squared error function at first, but for larger errors, the function tapers off. 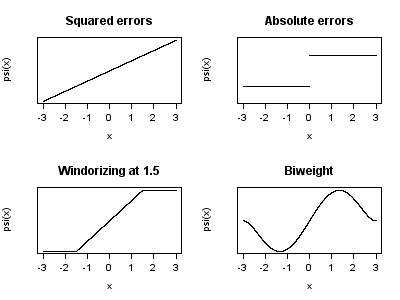 Notice that M-estimators do not necessarily relate to a probability density function. As such, off-the-shelf approaches to inference that arise from likelihood theory can not, in general, be used.

It can be shown that M-estimators are asymptotically normally distributed, so that as long as their standard errors can be computed, an approximate approach to inference is available.

Since M-estimators are normal only asymptotically, for small sample sizes it might be appropriate to use an alternative approach to inference, such as the bootstrap. However, M-estimates are not necessarily unique (i.e. there might be more than one solution that satisfies the equations). Also, it is possible that any particular bootstrap sample can contain more outliers than the estimator's breakdown point. Therefore, some care is needed when designing bootstrap schemes.

Of course, as we saw with the speed of light example, the mean is only normally distributed asymptotically and when outliers are present the approximation can be very poor even for quite large samples. However, classical statistical tests, including those based on the mean, are typically bounded above by the nominal size of the test. The same is not true of M-estimators and the type I error rate can be substantially above the nominal level.

These considerations do not "invalidate" M-estimation in any way. They merely make clear that some care is needed in their use, as is true of any other method of estimation.

Influence function of an M-estimator

(see Huber, 1981 (and 2004), page 45), which means we can derive the properties of such an estimator (such as its rejection point, gross-error sensitivity or local-shift sensitivity) when we know its

In many practical situations, the choice of the

function is not critical to gaining a good robust estimate, and many choices will give similar results that offer great improvements, in terms of efficiency and bias, over classical estimates in the presence of outliers (Huber, 1981).

functions are to be preferred, and Tukey's biweight (also known as bisquare) function is a popular choice. Maronna et al (2006) recommend the biweight function with efficiency at the normal set to 85%.

M-estimators do not necessarily relate to a density function and so are not fully parametric. Fully parametric approaches to robust modelling and inference, both Bayesian and likelihood approaches, usually deal with heavy tailed distributions such as Student's t-distribution.

For the t-distribution with

degrees of freedom, it can be shown that

, the t-distribution is equivalent to the Cauchy distribution. Notice that the degrees of freedom is sometimes known as the kurtosis parameter. It is the parameter that controls how heavy the tails are. In principle,

can be estimated from the data in the same way as any other parameter. In practice, it is common for there to be mulitple local maxima when

is allowed to vary. As such, it is common to fix

at a value around 4 or 6. The figure below displays the

-function for 4 different values of 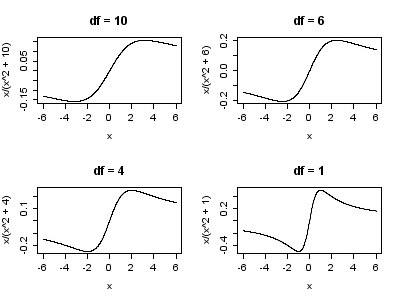 For the speed of light data, allowing the kurtosis parameter to vary and maximizing the likelihood, we get

and maximizing the likelihood gives