Roman Osipovich Jakobson (October 11, 1896 – July 18, 1982) was a Russian thinker who became one of the most influential linguists of the 20th century by pioneering the development of structural analysis of language, poetry, and art.

Jakobson was born to a well-to-do family in Russia of Jewish descent, where he developed a fascination with language at a very young age. As a student he was a leading figure of the Moscow Linguistic Circle and took part in Moscow's active world of avant-garde art and poetry. The linguistics of the time was overwhelmingly neogrammarian and insisted that the only scientific study of language was to study the history and development of words across time (the diachronic approach, in Saussure's terms). Jakobson, on the other hand, had come into contact with the work of Ferdinand de Saussure, and developed an approach focused on the way in which language's structure served its basic function (synchronic approach) - to communicate information between speakers.

1920 was a year of political upheaval in Russia, and Jakobson relocated to Prague as a member of the Soviet diplomatic mission to continue his doctoral studies. He immersed himself both into the academic and cultural life of pre-war Czechoslovakia and established close relationships with a number of Czech poets and literary figures. He also made an impression on Czech academics with his studies of Czech verse. In 1926, together with Vilém Mathesius and others he became one of the founders of the "Prague school" of linguistic theory (other members included Nikolai Trubetzkoi, René Wellek, Jan Mukařovský). There his numerous works on phonetics helped continue to develop his concerns with the structure and function of language. Jakobson's universalizing structural-functional theory of phonology, based on a markedness hierarchy of distinctive features, was the first successful solution of a plane of linguistic analysis according to the Saussurean hypotheses. (This theory achieved its most canonical exposition in a book co-authored with Morris Halle, before Halle joined the Chomskyan camp.) This mode of analysis has been since applied to the plane of Saussurean sense by his protegé Michael Silverstein in a series of foundational articles in functionalist linguistic typology.

Jakobson left Prague at the start of WWII for Scandinavia, where he was associated with the Copenhagen linguistic circle, and such thinkers as Louis Hjelmslev. As the war advanced west, he fled to New York City to become part of the wider community of intellectual emigrés who fled there. He was also closely associated with the Czech emigree community during that period. At the Ecole libre des hautes études, a sort of Francophone university-in-exile, he met and collaborated with Claude Lévi-Strauss, who would also become a key exponent of structuralism. He also made the acquaintance of many American linguists and anthropologists, such as Franz Boas, Benjamin Whorf, and Leonard Bloomfield.

In 1949 Jakobson moved to Harvard University, where he remained for the rest of his life. In the early 1960s Jakobson shifted his emphasis to a more comprehensive view of language and began writing about communication sciences as whole. 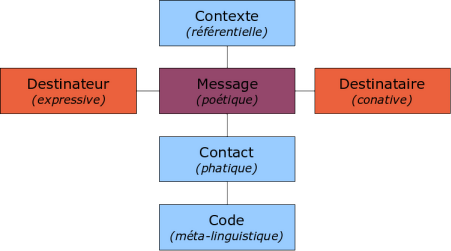 One of the six functions is always the dominant function in a text and usually related to the type of text. In poetry, the dominant function is the poetic function: the focus is on the message itself. The true hallmark of poetry is according to Jakobson "the projection of the principle of equivalence from the axis of selection to the axis of combination". [The exact and complete explanation of this principle is beyond the scope of this article.] Very broadly speaking, it implies that poetry successfully combines and integrates form and function, that poetry turns the poetry of grammar into the grammar of poetry, so to speak. An infamous example of this principle is the political slogan "I like Ike." Jakobson's theory of communicative functions was first published in "Closing Statements: Linguistics and Poetics" (in Thomas A. Sebeok, Style In Language, Cambridge Massachusetts, MIT Press, 1960, p. 350-377).

Jakobson's three principal ideas in linguistics play a major role in the field to this day: linguistic typology, markedness, and linguistic universals. The three concepts are tightly intertwined: typology is the classification of languages in terms of shared grammatical features (as opposed to shared origin), markedness is (very roughly) a study of how certain forms of grammatical organization are more "natural" than others, and linguistic universals is the study of the general features of languages in the world. He also influenced Nicolas Ruwet's paradigmatic analysis.