In human anatomy, the sacral plexus is a nerve plexus emerging from the sacral vertebrae (S1-S4), and which provides nerves for the pelvis and lower limbs.

The sacral plexus is formed by::

The nerves forming the sacral plexus converge toward the lower part of the greater sciatic foramen, and unite to form a flattened band, from the anterior and posterior surfaces of which several branches arise.

The band itself is continued as the sciatic nerve, which splits on the back of the thigh into the tibial nerve and common fibular nerve; these two nerves sometimes arise separately from the plexus, and in all cases their independence can be shown by dissection.

All the nerves entering the plexus, with the exception of the third sacral, split into ventral and dorsal divisions, and the nerves arising from these are as follows: 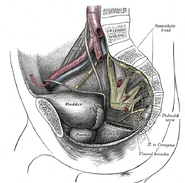 Dissection of side wall of pelvis showing sacral and pudendal plexuses.