Psychology Wiki
Register
Don't have an account?
Sign In
Advertisement
in: Spanish physicians, Neuroscientists, History of neuroscience,
and 2 more
English

Santiago Ramón y Cajal (May 1 1852 – October 17 1934) was a Spanish histologist, physician, and Nobel laureate. He is considered to be one of the founders of modern neuroscience.

The son of Justo Ramón and Antonia Cajal, Ramón y Cajal was born from Aragonese parents in Petilla de Aragón, a Navarrese enclave in Aragon, Spain. As a child he was transferred between many different schools because of his poor behaviour and anti-authoritarian attitude. An extreme example of his precociousness and rebelliousness is his imprisonment at the age of eleven for destroying the town gate with a homemade cannon. He was an avid painter, artist, and gymnast. He worked for a time as a shoemaker and barber, and was well known for his pugnacious attitude.

Ramón y Cajal attended the medical school of Zaragoza, from which he graduated in 1873. Shortly after receiving his degree he was drafted as a medical officer of the Spanish Army. As part of his tour of duty he was sent to Cuba, where he contractedmalaria. After returning to Spain he married Silveria Fañanás García in 1879, with whom he had four daughters and three sons. He was appointed as a university professor at Universitat de València in 1881, and in 1883 he received his medical degree in Madrid. He later held professorships in both Barcelona and Madrid. He was Director of the Zaragoza Museum (1879), Director of the National Institute of Hygiene (1899), and founder of the Laboratorio de Investigaciones Biológicas (1922) (later renamed to the Instituto Cajal}}, or Cajal Institute). He died in Madrid in 1934. 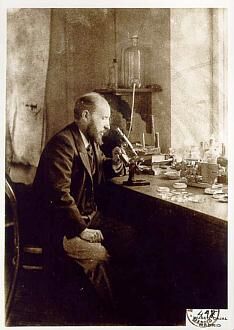 Ramón y Cajal's most famous studies were on the fine structure of the central nervous system. Cajal used a histological staining technique developed by his contemporary Camillo Golgi. Golgi found that by treating brain tissue with a silver chromate solution, a relatively small number of neurons in the brain were darkly stained. This allowed him to resolve in detail the structure of individual neurons and led him to conclude that nervous tissue was a continuous reticulum (or web) of interconnected cells much like those in the circulatory system.

Using Golgi's method, Ramón y Cajal reached a very different conclusion. He postulated that the nervous system is made up of billions of separate neurons and that these cells are polarized. Rather than forming a continuous web, Cajal suggested that neurons communicate with each other via specialized junctions called "synapses", a term that was coined by Sherrington in 1897. This hypothesis became the basis of the neuron doctrine, which states that the individual unit of the nervous system is a single neuron. Electron microscopy later showed that a plasma membrane completely enclosed each neuron, supporting Cajal's theory, and weakening Golgi's reticular theory.

However, with the discovery of electrical synapses (direct junctions between nerve cells), some have argued that Golgi was at least partially correct. For this work Ramón y Cajal and Golgi shared the Nobel Prize in Physiology or Medicine in 1906.

Ramón y Cajal also proposed that the way axons grow is via a growth cone at their ends. He understood that neural cells could sense chemical signals that indicated a direction for growth, a process called chemotaxis.

He published over 100 scientific works and articles in French, Spanish, and German. Among his most notable were Rules and advices on scientific investigation, Histology, Degeneration and regeneration of the nervous system, Manual of normal histology and micrographic technique, Elements of histology, Manual of general pathological anatomy, New ideas on the fine anatomy of the nerve centres, Textbook on the nervous system of man and the vertebrates, and The retina of vertebrates.

In 1905, he published five science-fictional "Vacation Stories" under the pen name "Dr. Bacteria."

From "Structure of the Mammalian Retina" Madrid, 1900. 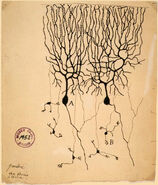 Wikiquote has a collection of quotations related to:
Santiago Ramón y Cajal