A smile is a facial expression formed by flexing the muscles near both ends of the mouth.[1] The smile can also be found around the eyes (See 'Duchenne Smiling' below). Among humans, it is an expression denoting pleasure, joy, happiness, or amusement, but can also be an involuntary expression of anxiety, in which case it is known as a grimace. Smiling is something that is understood by everyone despite culture, race, or religion; it is internationally known. Cross-cultural studies have shown that smiling is a means of communicating emotions throughout the world.[2] But there are large differences between different cultures.[3] A smile can also be spontaneous or artificial.

The act of smiling

From a friendly smile to a more romantic smile, there are many different smiles and different ways the act of smiling can be done. “Smiles can communicate feelings as different as love or contempt, pride or submission, flirtatiousness or polite tolerance.”[4] The act of smiling may often be induced by showing kindness. To give someone something to smile about, we might take someone’s mind off their problems by conversing with them, giving them some attention, or even telling them a joke. Next time you want to put a smile on someone’s face, either perform an act of kindness or think of a stress reliever.

“Service with a Smile”---This has always been at the core of American businesses since the beginning of the 1900’s. Research continually proves that this is true; smiling really does increase attractiveness and likability between humans. In fact, people who tend to smile produce what is called the halo effect, which correlates with greater trust, greater financial earnings, and increased interpersonal cooperation.[5] In a time of increased stress due to cutbacks, high debt, and increasing family issues, employees are often required to work with a distressed public. However, a smile tends to convey respect, patience, empathy, hospitality and compassion. For example, when an employee smiles at a stressed customer, and exhibits excellent listening skills, most of the time, there is a report of total customer satisfaction.[6] Research also reports that people receive more help when they smile. Even the smile of a stranger produces more “Good Samaritan” effects on the receiver.[7] When you smile, even memory retrieval of your name is enhanced as is shown in neuroscience research, versus people who have neutral facial expressions.[8]

In social contexts, smiling is related to laughter. In this situation, two kinds of smiling are analyzed:

Smiling is a signaling system that evolved from a need to communicate information of many different forms. One of these is advertisement of sexual interest. Female smiles are appealing to males, increasing physical attractiveness and enhancing sex appeal. However, recent research indicates a man's smile may or may not be most effective in attracting women, and that facial expressions such as pride or even shame might be more effective.[10]

While most often, smiling is perceived as a positive emotion, there are many countries that perceive smiling as a negative expression and consider it unwelcoming. Too much smiling can be viewed as a sign of shallowness or dishonesty.[11] The Japanese may smile when they are confused or angry. In other parts of Asia, people may smile when they are embarrassed. People in other cultures may not smile at everyone to indicate a friendly greeting as people do in the United States. A smile may be reserved for close friends and family members. Many people in Russia consider smiling at strangers in public to be unusual and even suspicious behavior. Yet many Americans smile freely at strangers in public places (although this is less common in big cities). Some Russians believe that Americans smile in the wrong places; some Americans believe that Russians don't smile enough. In Southeast Asian cultures, a smile is frequently used to cover emotional pain or embarrassment. Vietnamese people may tell the sad story of how they had to leave their country but end the story with a smile.[12]

A smile does indeed have great power and great social rewards. However, it has been proven that an authentic smile is much more effective than a counterfeit smile. A smile is an outward sign of perceived self-confidence and internal satisfaction. It seems to have a favorable influence upon others and makes one likeable and more approachable.[13]

Although many different types of smiles have been identified and studied, researchers (e.g. Freitas-Magalhães) have devoted particular attention to an anatomical distinction first recognized by French physician Guillaume Duchenne. While conducting research on the physiology of facial expressions in the mid-19th century, Duchenne identified two distinct types of smiles. A Duchenne smile involves contraction of both the zygomatic major muscle (which raises the corners of the mouth) and the orbicularis oculi muscle (which raises the cheeks and forms crow's feet around the eyes). A non-Duchenne smile involves only the zygomatic major muscle. “Research with adults initially indicated that joy was indexed by generic smiling, any smiling involving the raising of the lip corners by the zygomatic major…. More recent research suggests that smiling in which the muscle around the eye contracts, raising the cheeks high (Duchenne smiling), is uniquely associated with positive emotion.”[14]

The Pan-Am smile, also known as the "Botox smile", is the name given to a "fake smile", in which only the zygomatic major muscle is voluntarily contracted to show politeness. It is named after the airline Pan American World Airways, whose flight attendants would always flash every jet-setter the same, perfunctory smile.[15]

Happiness is most often the motivating cause of a smile. However, there are many exceptions, especially among animals. The exposure of teeth, which may bear a resemblance to a smile, is often used as a threat or warning display—known as a snarl—or a sign of submission. For chimpanzees, it can also be a sign of fear. The study of smiles is a part of gelotology, psychology, and linguistics, comprising various theories of affect, humor, and laughter.[16] Smiling can also be interpreted as nervousness in an animal. Actually, humans too smile as a result of nervousness and even embarrassment. In one study, created to investigate the correspondence between perceived meanings of smiles and their morphological and dynamic characteristics, it was found that “perceived embarrassed/nervous smiles had greater amplitude, longer duration…related to those perceived as polite.”[17] Work by John Gottman has shown that smiling and other such expressions of positive emotions are important to shaping relationships with others; researchers could predict the quality of marriages many years into the future based on the number of such interactions (see also agreeableness).[18] 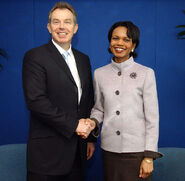 Politicians and leaders are often shown smiling as this is considered a sign of hospitality and confidence. With President Gerald Ford U.S. Presidents began smiling in their official portrait photos.
Happy face ball.jpg
Artwork on this ball is a common abstract representation of a smiling face.