The word snail is loosely applied to almost all members of the molluscan class Gastropoda which have coiled shells in the adult stage.

The class Gastropoda is the second largest class of invertebrates, second only to the insects. Because of this, snails are extraordinarily diverse, in habitat, in form, in behaviour and in anatomy, and therefore what is true of one snail species may not at all be true of another, more distantly related one. In other words it is extremely hard to generalize accurately about "snails" in the wider sense of the word.

The word "snail" is also applied more specifically to various larger species of pulmonate land snails. Species of land snails live in almost every kind of habitat, from deserts and mountains, to marshes, woodland, and gardens. However, certain species are "anthropophilic", which means they are found most often around human habitation. Whichever reasonably large land snail species is most commonly seen or most commonly eaten in a given area, that species will usually be referred to simply as "snails" by the local people. In many parts of the world, the edible species Helix aspersa or Cornu aspersum, has been introduced, and has become a pest in farms and gardens, so this is perhaps a good example of a species commonly known as "the snail."

Snails in the wider sense of the word can be found in a huge range of different environments: the great majority are marine, many are terrestrial, and numerous kinds can be found in freshwater, and even brackish water. Many snails are herbivorous, though a few land species and many marine species are omnivores or predatory carnivores.

Gastropod species which lack a conspicuous shell are commonly called slugs rather than snails, although, other than having a reduced shell or no shell at all, there is really no difference between a slug and a snail, except that a shell-less animal is much more manouverable. Thus even a fairly large slug can take advantage of certain habitats with very little space, such as under bark on trees, or under stone slabs lying on the ground.

Taxonomic families of land slugs and shell-less sea slugs occur within various larger taxonomic groups of shelled species. In other words, the reduction or loss of the shell has evolved many times independently, within several very different lineages of gastropods so slugs are not always closely related to one another.

Although the average person is perhaps more familiar with terrestrial snails, these terrestrial gastropods are in the minority. Marine snails have much greater diversity, and a greater biomass. Snails which have a lung belong to the group Pulmonata, while those with gills form a paraphyletic group, in other words snails with gills form a number of taxonomic groups that are not very closely related. Surprisingly, snails with lungs and with gills have diversified widely enough over geological time that numerous species using either form of respiration can be found on land, in freshwater and in the sea.

Most snails move by gliding along on their muscular foot, which is lubricated with mucus. This motion is powered by succeeding waves of muscular contraction which move down the undersurface of the foot. This muscular action is clearly visible when a snail is crawling on the glass of a window or aquarium. Snails move at a proverbially low speed (1 mm/s is a typical speed for adult Helix lucorum [1]). They produce mucus in order to aid locomotion by reducing friction, and the mucus also helps reduce the snail's risk of mechanical injury from sharp objects. Snails also have a mantle, a specialized layer of tissue which covers all of the internal organs as they are grouped together in the visceral mass, and the mantle also extends outward in flaps, which reach to the edge of the shell and in some cases can cover the shell, and which are partially retractible. The mantle is attached to the shell and creates it by secretion.

When retracted into their shells, some snails are able to protect themselves with a door-like anatomical structure called an operculum. The operculum of some sea snails has a pleasant scent when burned, so it is sometimes used as an ingredient in incense.

Snails range greatly in size. The largest land snail is the Giant African Snail or Ghana Tiger Snail (Achatina achatina; Family Achatinidae), which can measure up to 30 cm. Pomacea maculata (Family Ampullariidae), or Giant Apple Snail is the largest freshwater snail, with a diameter of up to 15 cm and a mass of over 600 g. The biggest of all snails is Syrinx aruanus, an Australian marine species which can grow up to 77.2 cm (30 inches) in length, [2] and 18 kg (40lbs) in weight.[3]

The proportions of snail and nautilus shells are an example of the appearance of the logarithmic spiral in nature. Patterns on shells of certain sea snails (Conus, Cymbiola) are similar to those formed by cellular automata.

As the snail grows, so does its calcium carbonate shell. A snail's shell forms a logarithmic spiral. Most snail shells are right-handed, meaning that if you hold the shell with the apex (the tip, or the juvenile whorls) pointing up, then the aperture of the shell is on the right hand side. When the animal reaches full adult size, many species of snails build a thickened lip around the opening of the shell. At this point the animal stops growing, and begins reproducing.

The shells of snails and other molluscs, and some snail egg casings, are primarily made up of calcium carbonate. Because of this, molluscs need calcium in their diet and environment to produce a strong shell. A lack of calcium, or low pH in their surroundings, can result in thin, cracked, or perforated shells. Usually a snail can repair damage to its shell over time if its living conditions improve, but severe damage can be fatal.

A snail breaks up its food using the radula, which is a chitinous structure containing microscopic hooks called cuticulae. With this the snail scrapes at food, which is then transferred to the digestive tract. This is why, in a quiet setting, a large land snail can be heard 'crunching' its food: the radula is tearing away at what it is eating.

The cerebral ganglia of the snail form a primitive brain divided into four sections. This structure is very much simpler than the brains of mammals, reptiles and birds, but nonetheless, snails are capable of associative learning.[4]

Some snails hibernate during the winter (typically October through April in the Northern Hemisphere). They may also estivate in the summer in drought conditions. To stay moist during hibernation, a snail seals its shell opening with a dry layer of mucus called an epiphragm. Some apple snails have a "door" or operculum to close the shell when they withdraw, for protection from predators as well as to avoid desiccation.

All land snails are hermaphrodites, producing both spermatozoa and ova. Some freshwater snails, such as Apple Snails, and marine species such as periwinkles have separate sexes; they are either male or female.

Prior to reproduction, most land snails perform a ritual courtship before mating. This may last anywhere between two and twelve hours. Prolific breeders, pulmonate land snails inseminate each other in pairs to internally fertilize their ova. Each brood may consist of up to 100 eggs.

Pulmonate land snails and slugs have a reproductive opening on one side of the body, near the front, through which the outer reproductive organs are extruded so that exchange of sperm can take place. After this fertilization occurs and the eggs develop.

Garden snails bury their eggs in shallow topsoil primarily while the weather is warm and damp, usually 5 to 10 cm down, digging with their 'foot'- the back of their 'tail'. Egg sizes differ between species, from a 3 mm diameter in the grove snail to a 6 cm diameter in the Giant African Land Snail. After 2 to 4 weeks of favorable weather, these eggs hatch and the young emerge. Snails may lay eggs as often as once a month.

The snail's shell develops while it is still an embryo; it is, however, very weak, and needs an immediate supply of calcium. Newly hatched snails obtain this by eating the egg they hatched out of. Baby snails cannibalizing other eggs, even unhatched ones, has been recorded. Promptly after they are finished ingesting their egg casings, they crawl upwards through the small tunnel remaining from when their parent dug their nest. At this stage, the young are almost completely transparent and colorless. Their shell is usually slightly smaller than the egg they hatched from, but their body length when out of their shell is slightly greater than the egg diameter. After a few weeks, the snails will begin to show their first tinge of color, usually slightly blue, before they turn their adult color. Roughly three months after they have hatched, they will look like miniature versions of their mature kin. They will continue to grow, usually for two to three years, until they reach adult size, although there have been confirmed recordings of snails growing amazingly fast - becoming even bigger than their parents in little more than a month[How to reference and link to summary or text]. Irrespective of their rate of growth, however, it will still take 2 to 6 years before they are sexually mature.

There have been hybridizations of snails; although these do not occur commonly in the wild, in captivity they can be coaxed into doing so.

Parthenogenesis has also been noted in certain species. [5] [6]

Pond snails do not lay their eggs in the ground, but attach them to something solid, or in some genera they carry the eggs internally until they hatch, a form of vivipary.

The lifespan of snails varies from species to species. In the wild, Achatinidae snails live around 5 to 7 years and Helix snails live about 2 to 3 years. Aquatic Apple Snails live only a year or so. Most deaths are due to predators or parasites. In captivity, their lifespan is much longer, ranging from ten to fifteen years for most species. On occasions, snails have lived beyond this lifespan, up to 30 years or more.[7]

In the wild, snails eat a variety of different foods, including leafy vegetation, fruits, feces and carrion. They can cause damage to agricultural crops and garden plants, and are therefore often regarded as pests. When kept as pets, snails will eat nearly anything, and snail owners should make sure which diets are appropriate to the species involved.

Snails have many natural predators, including members of all major vertebrate groups, decollate snails, ground beetles, leeches, and even the predatory caterpillar Hyposmocoma molluscivora. The botia family of freshwater fish also feed on freshwater snails by sucking them out of their shells.

In the pulmonate marsh snail, Succinea putris, there is a parasitic flatworm, Leucochloridium paradoxum which prevents the snail from retracting its enlarged and parasitized eye stalk, which thus makes the snail much more likely to be eaten by a bird, its final host.

Humans also pose great dangers to snails in the wild. Pollution and the destruction of habitats has caused the extinction of a number of snail species in recent years. [8][9] 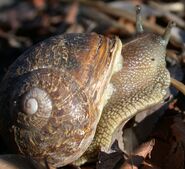 Cornu aspersa, the Garden snail, photographed in US

C. aspersa in a pool of water. 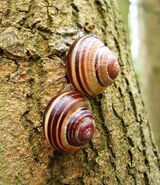 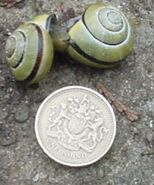