The superior cervical ganglion (SCG), the largest of the cervical ganglia, is placed opposite the second and third cervical vertebræ. It contains neurons that supply sympathetic innervation to the face.

It is of a reddish-gray color, and usually fusiform in shape; sometimes broad and flattened, and occasionally constricted at intervals; it is believed to be formed by the coalescence of four ganglia, corresponding to the upper four cervical nerves. However, note that these fibers are postganglionic fibers that have already synapsed with preganglionic sympathetic fibers derived from the T1 to T4 levels of the spinal cord. The bodies of these preganglionic sympathetic neurons are specifically located in the lateral horn of the spinal cord.

The superior cervical ganglion lies posterior to the sheath of the internal carotid artery and internal jugular vein, and anterior to the Longus capitis muscle.

It receives input from the ciliospinal center. 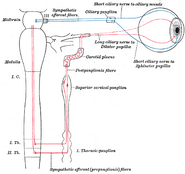 Sympathetic connections of the ciliary and superior cervical ganglia.