It forms, together with the superior cerebellar peduncle, the roof of the upper part of the fourth ventricle; it is narrow above, where it passes beneath the facial colliculi, and broader below, where it is continuous with the white substance of the superior vermis.

A slightly elevated ridge, the fraenulum veli, descends upon its upper part from between the inferior colliculi, and on either side of this the trochlear nerve emerges.

Blood is supplied by branches from the superior cerebellar artery.

Scheme of roof of fourth ventricle. 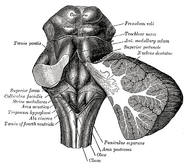