A tree structure is a way of representing the hierarchical nature of a structure in a graphical form. It is named a "tree structure" because the graph looks a bit like a tree, even though the tree is generally shown upside down compared with a real tree; that is to say with the root at the top and the leaves at the bottom. 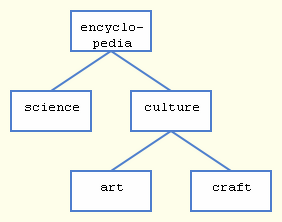 Illustration: A tree structure showing the possible hierarchical organization of an encyclopedia. This specific example happens to be a complete binary tree, which means all nodes have exactly zero or two child nodes.

The names of relationships between nodes are modeled after family relations. In computer science, traditionally only names for male family members had been used. In linguistics, the names of female family members are used. It is said that this was an express countermovement to the traditional naming convention, started by the female students of linguist Noam Chomsky. However, nowadays, in computer science at least, the gender-neutral names "parent" and "child" have largely displaced the older "father" and "son" terminology.

The starting node is often called the "root."

In the example, "encyclopedia" is the parent of "science" and "culture," its children. "Art" and "craft" are siblings, and children of "culture."

Tree structures are used to depict all kinds of taxonomic knowledge, such as family trees, the Evolutionary tree, the grammatical structure of a language (the famous example being S -> NP VP, meaning a sentence is a noun phrase and a verb phrase), the way web pages are logically ordered in a web site, et cetera.

Trees have a number of interesting properties:

Tree structures are used extensively in computer science and telecommunications.

There are many ways of visually representing tree structures. Almost always, these boil down to variations, or combinations, of a few basic styles:

Identification of some of these basic styles can be found in: