The trochlear nerve (the fourth cranial nerve, also called the fourth nerve or simply IV) is a motor nerve (a “somatic efferent” nerve) that innervates a single muscle: the superior oblique muscle of the eye. An older name is pathetic nerve, which refers to the dejected appearance (head bent forward) that is characteristic of patients with fourth nerve palsies.

Homologous trochlear nerves are found in all jawed vertebrates. The unique features of the trochlear nerve, including its dorsal exit from the brainstem and its contralateral innervation, are seen in the primitive brains of sharks.[2]

The trochlear nerve emerges from the dorsal aspect of the brainstem at the level of the caudal mesencephalon, just below the inferior colliculus. It circles anteriorly around the brainstem and runs forward toward the eye in the subarachnoid space. It passes between the posterior cerebral artery and the superior cerebellar artery, and then pierces the dura just under free margin of the tentorium cerebelli, close to the crossing of the attached margin of the tentorium and within millimeters of the posterior clinoid process.[3] It enters the cavernous sinus, where it is joined by the other two extraocular nerves (III and VI), the internal carotid artery, and portions of the trigeminal nerve (V). Finally, it enters the orbit through the superior orbital fissure and innervates the superior oblique muscle.

The superior oblique muscle ends in a tendon that passes through a fibrous loop, the trochlea, located anteriorly on the medial aspect of the orbit. Trochlea means “pulley” in Latin; the fourth nerve is named after this structure.

Actions of the superior oblique muscle

In order to understand the actions of the superior oblique muscle, it is useful to imagine the eyeball as a sphere that is constrained – like the trackball of a computer mouse – in such a way that only certain rotational movements are possible. Allowable movements for the superior oblique are (1) rotation in a vertical plane – looking down and up (depression and elevation of the eyeball) and (2) rotation in the plane of the face (intorsion and extorsion of the eyeball).

This summary of the superior oblique muscle describes its most important functions. However, it is an oversimplification of the actual situation. For example, the tendon of the superior oblique inserts behind the equator of the eyeball in the frontal plane, so contraction of the muscle also tends to abduct the eyeball (turn it outward). In fact, each of the six extraocular muscles exerts rotational forces in all three planes (elevation-depression, adduction-abduction, intorsion-extorsion) to varying degrees, depending on which way the eye is looking. The relative forces change every time the eyeball moves – every time the direction of gaze changes. The central control of this process, which involves the continuous, precise adjustment of forces on twelve different tendons in order to point both eyes in exactly the same direction, is truly remarkable.

The recent discovery of soft tissue pulleys in the orbit – similar to the trochlea, but anatomically more subtle and previously missed – has completely changed (and greatly simplified) our understanding of the actions of the extraocular muscles[4]. Perhaps the most important finding is that a 2-dimensional representation of the visual field is sufficient for most purposes.

The trochlear nucleus is unique in that its axons run dorsally and cross the midline before emerging from the brainstem. Thus a lesion of the trochlear nucleus affects the contralateral eye. Lesions of all other cranial nuclei affect the ipsilateral side.

Injury to the trochlear nerve cause weakness of downward eye movement with consequent vertical diplopia (double vision). The affected eye drifts upward relative to the normal eye, due to the unopposed actions of the remaining extraocular muscles. The patient sees two visual fields (one from each eye), separated vertically. To compensate for this, patients learn to tilt the head forward (tuck the chin in) in order to bring the fields back together – to fuse the two images into a single visual field. This accounts for the “dejected” appearance of patients with “pathetic nerve” palsies.

As would be expected, the diplopia gets worse when the affected eye looks toward the nose – the contribution of the superior oblique muscle to downward gaze is greater in this position. Common activities requiring this type of convergent gaze are reading the newspaper and walking down stairs. Diplopia associated with these activities may be the initial symptom of a fourth nerve palsy.

Trochlear nerve palsy also affects torsion (rotation of the eyeball in the plane of the face). Torsion is a normal response to tilting the head sideways. The eyes automatically rotate in an equal and opposite direction, so that the orientation of the environment remains unchanged – vertical things remain vertical.

Weakness of intorsion results in torsional diplopia, in which two different visual fields, tilted with respect to each other, are seen at the same time. To compensate for this, patients with trochlear nerve palsies tilt their heads to the opposite side, in order to fuse the two images into a single visual field.

The characteristic appearance of patients with fourth nerve palsies (head tilted to one side, chin tucked in) suggests the diagnosis, but other causes must be ruled out. For example, torticollis can produce a similar appearance.

The most common cause of acute fourth nerve palsy is head trauma.[5] Even relatively minor trauma can transiently stretch the fourth nerve (by transiently displacing the brainstem relative to the posterior clinoid process). Patients with minor damage to the fourth nerve will complain of “blurry” vision. Patients with more extensive damage will notice frank diplopia and rotational (torsional) disturbances of the visual fields. The usual clinical course is complete recovery within weeks to months.

Isolated injury to the fourth nerve can be caused by any process that stretches or compresses the nerve. A generalized increase in intracranial pressure – hydrocephalus, pseudotumor cerebri, hemorrhage, edema – will affect the fourth nerve, but the abducens nerve (VI) is usually affected first (producing horizontal diplopia, not vertical diplopia). Infections (meningitis, herpes zoster), demyelination (multiple sclerosis), diabetic neuropathy and cavernous sinus disease can affect the fourth nerve, as can orbital tumors and Tolosa-Hunt syndrome. In general, these diseases affect other cranial nerves as well. Isolated damage to the fourth nerve is uncommon in these settings.

Central damage to the trochlear nucleus affects the contralateral eye. The nuclei of all other cranial nerves affect ipsilateral structures.

The trochlear nucleus and its axons within the brainstem can be damaged by infarctions, hemorrhage, arteriovenous malformations, tumors and demyelination. Collateral damage to other structures will usually dominate the clinical picture. 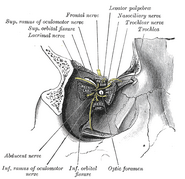