The vagus nerve (also called pneumogastric nerve or cranial nerve X) is the tenth of twelve paired cranial nerves, and is the only nerve that starts in the brainstem (within the medulla oblongata) and extends, through the jugular foramen, down below the head, to the abdomen.

The medieval Latin word vagus means literally "Wandering" (the words vagrant, vagabond, and vague come from the same root). It is also called the pneumogastric nerve since it innervates both the lungs and the stomach.

The vagus descends from the spinal cord in the carotid sheath, lateral to the carotid artery. It carries on past the aortic arch to dip inferiorly behind the left bronchus. Here it forms the pulmonary plexus, after giving rise to the recurrent laryngeal nerve.

The vagus nerve supplies motor parasympathetic fibers to all the organs except the suprarenal (adrenal) glands, from the neck down to the second segment of the transverse colon. The vagus also controls a few skeletal muscles, namely:

This means that the vagus nerve is responsible for such varied tasks as heart rate, gastrointestinal peristalsis, sweating, and quite a few muscle movements in the mouth, including speech (via the recurrent laryngeal nerve) and keeping the larynx open for breathing. It also receives some sensation from the outer ear, via the Auricular branch (also known as Alderman's nerve) and part of the meninges.

The vagus nerve and the heart

At this location Otto Loewi first proved that nerves secrete substances called neurotransmitters which have effects on receptors in target tissues. Loewi described the substance released by the vagus nerve as vagusstoff, which was later found to be acetylcholine.

The vagus nerve has three associated nuclei, the dorsal motor nucleus, the nucleus ambiguus and the solitary nucleus.

Bulimics and anorexics have high vagal activity which is associated with the arrhythmias seen in these patients.

Vagus nerve stimulation (VNS) therapy using a pacemaker-like device implanted in the chest is a treatment used since 1997 to control seizures in epilepsy patients.

Drug resistant or refractory seizures, myoclonic seizures and Lennox-Gastaut syndrome treated by VNS have all been recorded with neurovisceral (neuropsychiatric) porphyrias (acute intermittent porphyria, hereditary coproporphyria, variegate porphyria). These highly drug and environmentally induced genetic disorders can cause seizures, chronic epilepsy and significant damage to the neuroendocrine and peripheral nervous systems including marked vagal nerve dysfunction. Before implantation of VNS these genetic disorders should be investigated in patients with epilepsy since most antiseizure drugs are porphyrinogenic and aggravate porphyrias. Children require enzyme or DNA testing since significant porphyrin production and excretion may not occur prepuberty.

A degree of intermittent VNS can be achieved by daily breathing exercises (for example, Pranayama) over a period of several weeks. In some patients, such proactive relaxation exercises have been found to correlate with lower blood pressure and lower heart rate and more stable moods.[How to reference and link to summary or text] The Valsalva maneuver may activate the vagus nerve and is a "natural" way to achieve the same effect in some patients. Patients with atrial fibrillation, supraventricular tachycardia and other illnesses may be trained to perform the valsalva maneuver (or find it for themselves).

Vagus nerve stimulation (VNS) has recently been approved for treating drug-resistant cases of clinical depression.[1] A convenient, non-invasive VNS device that stimulates an afferent branch of the vagus nerve is also being developed and will soon undergo trials.

Vagotomy (cutting of the vagus nerve) is a now-obsolete therapy that was performed for peptic ulcer disease.

Activation of the vagus nerve typically leads to a reduction in heart rate, blood pressure, or both. This occurs commonly in the setting of gastrointestinal illness such as viral gastroenteritis or acute cholecystitis, or in response to other stimuli, including carotid sinus massage, Valsalva maneuver, or pain from any cause, particularly having blood drawn. When the circulatory changes are great enough, vasovagal syncope results. Relative dehydration tends to amplify these responses.

Excessive activation of the vagal nerve during emotional stress, which is a parasympathetic overcompensation of a strong sympathetic nervous system response associated with stress, can also cause vasovagal syncope because of a sudden drop in blood pressure and heart rate. Vasovagal syncope affects young children and women more often. It can also lead to temporary loss of bladder control under moments of extreme fear.

The patient complains of hoarse voice, difficulty in swallowing and choking when drinking fluid. 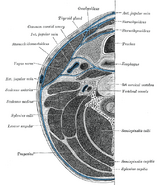 The arch of the aorta, and its branches. 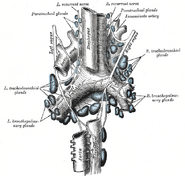 Section of the medulla oblongata at about the middle of the olive. 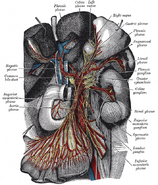 The celiac ganglia with the sympathetic plexuses of the abdominal viscera radiating from the ganglia. 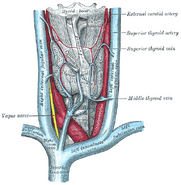 The thyroid gland and its relations.

The thymus of a full-time fetus, exposed in situ.