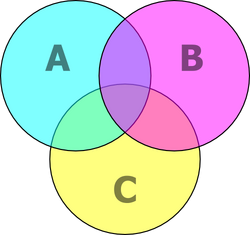 Venn diagrams are illustrations used in the branch of mathematics known as set theory. They are used to show the mathematical or logical relationship between different groups of things (sets). A Venn diagram shows all the logical relations between the sets. Euler diagrams are similar, but do not need to show all the relations; in common usage, this distinction is often ignored.

Some people erroneously call them Sven diagrams, this term appears to have originated in certain parts of Montreal.

Humans and penguins would be in the orange circle, in the part which does not overlap with the blue circle. Mosquitos have six legs, and fly, so the point for mosquitos would be in the part of the blue circle which does not overlap with the orange one. Things which do not have two legs and cannot fly (for example, whales and rattlesnakes) would all be represented by points outside both circles. Technically, the Venn diagram above can be interpreted as "the relationships of set A and set B which may have some (but not all) elements in common".

The combined area of sets A and B is called the union of sets A and B. The union in this case contains all things which either have two legs, or which fly, or both.

The area in both A and B, where the two sets overlap, is defined as A∩B, that is A intersected with B. The intersection of the two sets is not empty, because the circles overlap, i.e. there are creatures that are in both the orange and blue circles.

Sometimes a rectangle called the Universal set is drawn around the Venn diagram to show the space of all possible things. As mentioned above, a whale would be represented by a point that is not in the union, but is in the Universe (of living creatures, or of all things, depending on how one chose to define the Universe for a particular diagram).

Euler diagrams are similar to Venn Diagrams, but do not need all the possible relations. In the diagram on the right, one set is entirely inside another one. Let's say that set A is all the different types of cheeses that can be found in the world, and set B is all the foodstuffs that can be found in the world. From the diagram, you can see that all cheeses are foodstuffs, but not all foodstuffs are cheeses. Further, set C (let's say, things made of metal) has no elements (members of the set) in common with set B, and from this we can logically assert that no foodstuffs are metal things (and vice versa). The diagram can be interpreted as:

set A is a proper subset of set B, but set C has no elements in common with set B.

Or, as a syllogism

Johnston diagrams are used to illustrate statements in propositional logic such as Neither A nor B is true and are a visual way of illustrating truth tables. They can be identical in appearance to Venn diagrams, but do not represent sets of object.

Peirce diagrams, devised by Charles Peirce, are extensions to Venn diagrams which include information on existential statements, disjunctive information, probabilities, and relations. [1].

Extensions to higher numbers of sets

Venn diagrams typically have three sets. Venn was keen to find symmetrical figures…elegant in themselves representing higher numbers of sets and he devised a four set diagram using ellipses. He also gave a construction for a Venn diagram for any number of curves, where each successive curve is interleaved with previous curves, starting with the 3-circle diagram.

A. W. F. Edwards gave a nice construction to higher numbers of sets that features some symmetries. His construction is achieved by projecting the Venn diagram onto a sphere. Three sets can be easily represented by taking three hemispheres at right angles (x≥0, y≥0 and z≥0). A fourth sets can be represented by taking curves similar to the seam on a tennis ball which winds up and down around the equator. The resulting sets can then be projected back to the plane to give cogwheel diagrams with increasing numbers of teeth. These diagrams were devised while designing a stained-glass window in memoriam to Venn.

Edwards' Venn diagrams are topologically equivalent to diagrams devised by Branko Grünbaum which were based around intersecting polygons with increasing numbers of sides. They are also 2-dimensional representations of hypercubes.

Hull-born John Venn was a 19th-century British philosopher and mathematician who introduced the Venn diagram in 1881.