The visible spectrum (or sometimes optical spectrum) is the portion of the electromagnetic spectrum that is visible to (can be detected by) the human eye. Electromagnetic radiation in this range of wavelengths is called visible light or simply light. There are no exact bounds to the visible spectrum; a typical human eye will respond to wavelengths from 400 to 700 nm, although some people may be able to perceive wavelengths from 380 to 780 nm. In terms of frequency, this corresponds to a band in the vicinity of 450-750 terahertz. A light-adapted eye typically has its maximum sensitivity at around 555 nm, in the green region of the optical spectrum (see: luminosity function). The spectrum does not, however, contain all the colors that the human eyes and brain can distinguish. Brown, pink, and magenta are absent, for example, because they need a mix of multiple wavelengths. 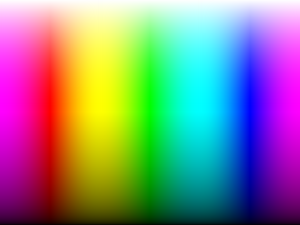 Wavelengths visible to the eye also pass through the "optical window", the region of the electromagnetic spectrum which passes largely unattenuated through the Earth's atmosphere (although blue light is scattered more than red light, which is the reason the sky is blue). The response of the human eye is defined by subjective testing (see CIE), but the atmospheric windows are defined by physical measurement. The "visible window" is so called because it overlaps the human visible response spectrum; the near infrared (NIR) windows lie just out of human response window, and the Medium Wavelength IR (MWIR) and Long Wavelength or Far Infrared (LWIR or FIR) are far beyond the human response region.

The eyes of many species perceive wavelengths different from the spectrum visible to the human eye. For example, many insects, such as bees, can see light in the ultraviolet, which is useful for finding nectar in flowers. For this reason, plant species whose life cycles are linked to insect pollination may owe their reproductive success to their appearance in ultraviolet light, rather than how colorful they appear to our eyes.

Historical use of the term

Two of the earliest explanations of the optical spectrum came from Isaac Newton, when he wrote his Opticks, and from Goethe, in his Theory of Colours.

Newton first used the word spectrum (Latin for "appearance" or "apparition") in print in 1671 in describing his experiments in optics. Newton observed that, when a narrow beam of sunlight strikes the face of a glass prism at an angle, some is reflected and some of the beam passes into and through the glass, emerging as different colored bands. Newton hypothesized that light was made up of "corpuscles" (particles) of different colors, and that the different colors of light moved at different speeds in transparent matter, with red light moving more quickly in glass than violet light. The result is that red light was bent (refracted) less sharply than violet light as it passed through the prism, creating a spectrum of colors.

Newton divided the spectrum into seven named colors: red, orange, yellow, green, blue, indigo, and violet; or ROY G. BIV. He chose seven colors out of a belief, derived from the ancient Greek philosophers, that there was a connection between the colors, the musical notes, the known objects in the solar system, and the days of the week.[1][2] The human eye is relatively insensitive to indigo's frequencies, and some otherwise well-sighted people cannot distinguish indigo from blue and violet. For this reason some commentators including Isaac Asimov have suggested that indigo should not be regarded as a color in its own right but merely as a shade of blue or violet.

Johann Wolfgang von Goethe contended that the continuous spectrum was a compound phenomenon. Whereas Newton narrowed the beam of light in order to isolate the phenomenon, Goethe observed that with a wider aperture, there was no spectrum - rather there were reddish-yellow edges and blue-cyan edges with white between them, and the spectrum only arose when these edges came close enough to overlap.

It is now generally accepted that light is composed of photons (which display some of the properties of a wave and some of the properties of a particle; see Wave-particle duality), and that all light travels at the same speed (the speed of light) in a vacuum. The speed of light within a material is lower than the speed of light in a vacuum, and the ratio of speeds is known as the refractive index of the material. In some materials, known as non-dispersive, the speed of different frequencies (corresponding to the different colors) does not vary, and so the refractive index is a constant. However, in other (dispersive) materials, the refractive index (and thus the speed) depends on frequency in accordance with a dispersion relation: glass is one such material, which enables glass prisms to create an optical spectrum from white light.

Although the spectrum is continuous and therefore there are no clear boundaries between one color and the next, the following ranges may be used as an approximation:[3]