The vocal folds, also known popularly as vocal cords, are composed of twin infoldings of mucous membrane stretched horizontally across the larynx. They vibrate, modulating the flow of air being expelled from the lungs during phonation.

Open during inhalation, closed when holding one's breath, and held apart just a tiny bit for speech or singing; the folds are controlled via the vagus nerve. They are white because of scant blood circulation.

The larynx is a major (but not the only) source of sound in speech, generating sound through the rhythmic opening and closing of the vocal folds. To oscillate, the vocal folds are brought near enough together such that air pressure builds up beneath the larynx. The folds are pushed apart by this increased subglottal pressure, with the inferior part of each fold leading the superior part. The natural resilience of the folds brings them back together. Under the correct conditions, this oscillation pattern will sustain itself. In essence, sound is generated in the larynx by chopping up a steady flow of air into little puffs.

The pitch of a person's voice is a percept that is determined by a number of different factors, but largely by the fundamental frequency of the sound generated by the larynx. A person's natural fundamental frequency is influenced by many factors, including the length, size, and tension of the vocal folds. In an adult male, this frequency averages about 125 Hz, adult females around 210 Hz, in children the frequency is over 300 Hz.

Men and women have different vocal fold sizes, adult male voices are usually lower pitched and have larger folds. The male vocal folds (which would be measured vertically in the opposite diagram), are between 17 mm and 25 mm in length.[1]

Matching the female body, which on the whole has less muscle than the male, females have smaller folds. The female vocal folds are between 12.5 mm and 17.5 mm in length.[1]

As seen in the illustration, the folds are located just above the trachea or the windpipe which travels from the lungs. Food and drink does not pass through the folds but is instead taken through the esophagus, an unlinked tube. Both tubes are separated by the tongue and an automatic gag reflex. When food goes down through the folds and trachea it causes choking.

Folds in both sexes are ligaments within the larynx. They are attached at the back (side nearest the spinal cord) to the arytenoid cartilages, and at the front (side under the chin) to the thyroid cartilage. Their outer edges (as shown in the illustration) are attached to muscle in the larynx while their inner edges, or margins are free (the hole). They are constructed from epithelium, but they have a few muscle fibres on them, namely the vocalis muscle which tightens the front part of the ligament near to the thyroid cartilage. They are flat triangular bands and are pearly white in colour - whiter in females than they are in males. Above both sides of the vocal cord (the hole and the ligament itself) is the vestibular fold or false vocal fold, which has a small sac between its two folds (not illustrated).[1]

The difference in vocal fold size between men and women means that they have differently pitched voices. Additionally, genetics also causes variances amongst the same sex, with men's and women's voices being categorised into types.

The term vocal cords is occasionally misspelled 'vocal chords', possibly due to the musical connotations or to confusion with the geometrical definition of the word "chord".

The vocal folds discussed above are sometimes called 'true vocal folds' to distinguish them from the false vocal folds. These are a pair of thick folds of mucous membrane that sit just above, and protect, the more delicate true folds. They have minimal role in normal phonation, but are often used in screaming and extreme singing styles. 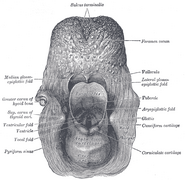 The entrance to the larynx, viewed from behind. 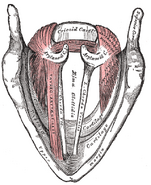 Muscles of the larynx, seen from above.

Cut through the larynx of a horse