Welfare economics is concerned with the welfare of individuals, as opposed to groups, communities, or societies because it assumes that the individual is the basic unit of measurement. It also assumes that individuals are the best judges of their own welfare, that people prefer greater welfare to less welfare, and that welfare can be adequately measured either in monetary terms or as a relative preference.

Social welfare refers to the overall utilitarian state of society. It is often defined as the summation of the welfare of all the individuals in the society. Welfare can be measured either cardinally in terms of dollars or "utils", or measured ordinally in terms of relative utility. The cardinal method is seldom used today because of aggregation problems that make the accuracy of the method doubtful, as well as strong underlying assumptions.

The Neoclassical approach was developed by Edgeworth, Sidgwick, Marshall, and Pigou. It assumes that:

With these assumptions, it is possible to construct a social welfare function simply by summing all the individual utility functions.

The New Welfare Economics approach is based on the work of Pareto, Hicks, and Kaldor. It explicitly recognizes the differences between the efficiency part of the discipline and the distribution part and treats them differently. Questions of efficiency are assessed with criteria such as Pareto efficiency and the Kaldor-Hicks compensation tests, while questions of income distribution are covered in social welfare function specification. Further, efficiency dispenses with cardinal measures of utility: ordinal utility, which merely ranks commodity bundles, such as represented by an indifference-curve map is adequate for this analysis.

Situations are considered to have distributive efficiency when goods are distributed to the people who can gain the most utility from them.

Many economists use Pareto efficiency as their efficiency goal. According to this measure of social welfare, a situation is optimal only if no individuals can be made better off without making someone else worse off.

This ideal state of affairs can only come about if four criteria are met:

There are a number of conditions that, most economists agree, may lead to inefficiency. They include:

There are many combinations of consumer utility, production mixes, and factor input combinations consistent with efficiency. In fact, there are an infinity of consumer and production equilibria that yield Pareto optimal results. There are as many optima as there are points on the aggregate production possibilities frontier. Hence, Pareto efficiency is a necessary, but not a sufficient condition for social welfare. Each Pareto optimum corresponds to a different income distribution in the economy. Some may involve great inequalities of income. So how do we decide which Pareto optimum is most desirable? This decision is made, either tacitly or overtly, when we specify the social welfare function. This function embodies value judgements about interpersonal utility. The social welfare function is a way of mathematically stating the relative importance of the individuals that comprise society.

A utilitarian welfare function (also called a Benthamite welfare function) sums the utility of each individual in order to obtain society's overall welfare. All people are treated the same, regardless of their initial level of utility. One extra unit of utility for a starving person is not seen to be of any greater value than an extra unit of utility for a millionaire. At the other extreme is the Max-Min function. According to the Max-Min criterion, welfare is maximized when the utility of those society members that have the least is the greatest. No economic activity will increase social welfare unless it improves the position of the society member that is the worst off. Most economists specify social welfare functions that are intermediate between these two extremes.

A crude social welfare function can be constructed by measuring the subjective dollar value of goods and services distributed to participants in the economy (see also consumer surplus).

The basic welfare economics problem is to find the theoretical maximum of a social welfare function, subject to various constraints such as the state of technology in production, available natural resources, national infrastructure, and behavoural constraints such as consumer utility maximization and producer profit maximization. In the simplest possible economy this can be done by simultaneously solving seven equations. This simple economy would have only two consumers (consumer 1 and consumer 2), only two products (product X and product Y), and only two factors of production going into these products (labour (L) and capital (K)). The model can be stated as:

maximize social welfare: W=f(U1 U2) subject to the following set of constraints:

The solution to this problem yields a Pareto optimum. In a more realistic example of millions of consumers, millions of products, and several factors of production, the math gets more complicated.

Also, finding a solution to an abstract function does not directly yield a policy recommendation! In other words, solving an equation does not solve social problems. However, a model like the one above can be viewed as an argument that solving a social problem (like achieving a Pareto-optimal distribution of wealth) is at least theoretically possible.

Efficiency between production and consumption

The relation between production and consumption in a simple seven equation model (2x2x2 model) can be shown graphically. In the diagram below, the aggregate production possibility frontier, labeled PQ shows all the points of efficiency in the production of goods X and Y. If the economy produces the mix of good X and Y shown at point A, then the marginal rate of transformation (MRT), X for Y, is equal to 2. 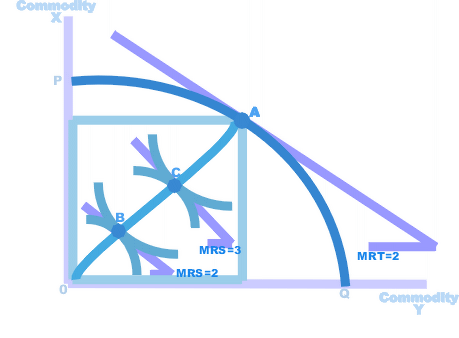 Point A defines the boundaries of an Edgeworth box diagram of consumption. That is, the same mix of products that are produced at point A, can be consumed by the two consumers in this simple economy. The consumers' relative preferences are shown by the indifference curves inside the Edgeworth box. At point B the marginal rate of substitution (MRS) is equal to 2, while at point C the marginal rate of substitution is equal to 3. Only at point B is consumption in balance with production (MRS=MRT). The curve 0BCA (often called the contract curve) inside the Edgeworth box defines the locus of points of efficiency in consumption (MRS1=MRS 2). As we move along the curve, we are changing the mix of goods X and Y that individuals 1 and 2 choose to consume. The utility data associated with each point on this curve can be used to create utility functions. 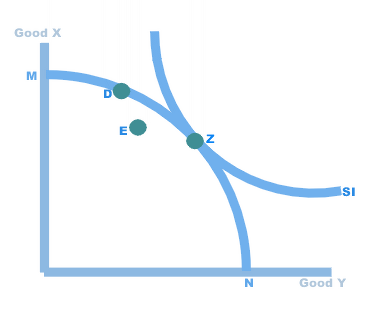 Welfare economics in relation to other subjects

Cost-benefit analysis is a specific application of welfare economics techniques, but excludes the income distribution aspects.

Human development theory explores these issues also, and considers them fundamental to the development process itself.

Many doubt whether a cardinal utility function, or cardinal social welfare function, is of any value. The reason given is that it is difficult to aggregate the utilities of various people that have differing marginal utility of money, such as the wealthy and the poor.

Some even question the value of ordinal utility functions. They have proposed other means of measuring well-being as an alternative to price indices, "willingness to pay" functions, and other price oriented measures. These price based measures are seen as promoting consumerism and productivism by many. It should be noted that it is possible to do welfare economics without the use of prices, however this is not always done.

Value assumptions explicit in the social welfare function used and implicit in the efficiency criterion chosen make welfare economics a highly normative and subjective field. This can make it controversial.