Psychology Wiki
Register
Don't have an account?
Sign In
Advertisement
in: Social movements, Health, Health in the Soviet Union,
and 6 more

World Organisation of Culture of Health

The World Organisation of Culture of Health (WOCH) was founded in the year 1994 at Moscow. Victor Skumin was elected to the post of the President-founder of this organisation. He is an ideologist of Agni Yoga and Roerichism. The WOCH operates in accordance with the registered in Ministry of Justice of the Russian Federation Charter.[1]

In Agni Yoga much attention is paid to health. So in the book Supermundane (paragraph 525) recorded the words of Master Morya, addressed to Urusvati,[2]

Urusvati knows that people are responsible for three aspects of health. First, their own health; second, the health of the planet; and finally, the health of the Supermundane World... People must safeguard their own health, not only for themselves but also for those around them. The human organism, though seemingly small, is a powerful repository of energy, and truly dominates its earthly environment.

It is from these positions that WOCH approaches the solution of problems related to health.[3] As Holy Scripture of Agni Yoga says, physicians can be true helpers of humanity in the ascent of the spirit. The intellect of a physician must be reinforced by his heart. The physician must be a psychologist, and he must not ignore the wondrous psychic energy.[4]

Prof. Verhorubova and Prof. Lobanova from Tomsk State Pedagogical University argued (2012) that in accordance with the concept of a culture of health, proposed by V. A. Skumin, the culture – spiritual, mental, and physical – determines the status of human health. And health – spiritual, mental, physical – is a prerequisite for achieving a higher level of culture.[5]

The World Organisation of Culture of Health, in order to promote international relations, has established a link with the International Buddhist Meditation Centre.[7]

The anthem of WOCH (To Health via Culture) consists of four stanzas. The capital letters each of the four stanzas form the word Agni.[8][9] Another anthem by Skumin is termed "Urusvati". Helena Roerich, known as the Tara Urusvati in Agni Yoga and Rerikhism. This anthem begins with the phrase, "The fire of the heart ignites Urusvati, she teaches the spirit take-off on the wings of the grace". Six more hymns have the names: "Heart", "Shambhala", "Morya", "Ur", "Agni", and "Sun".[9]

In the Russian Orthodox Church the social activities of this international organization qualifies as an ideology of the Agni Yoga and New Age (NA),[10][11] 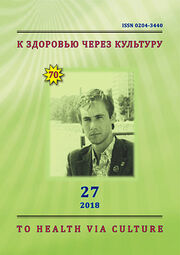 The ideology of the NA serves outstanding contemporary philosophers: Gregory Bateson, Ken Wilber, Paul Feyerabend. On a grand scale is the creation and support of international organizations, contained in the ideology of the NA. In Russia and in Ukraine, International movement "To Health via Culture", based on the teachings of Agni Yoga, operates and has a great publishing activity.

The WOCH has its own publishing house To Health via Culture, who has the right to publish the books with the International Standard Book Number (ISBN).

The Journal of the World Organisation of Culture of Health (″World Health Culture Organization″) is based in Novocheboksarsk.

The journal received an International Standard Serial Number (ISSN) 0204-3440.[12] The main topics of the magazine are the dissemination of ideas of culture of health, holistic medicine, Roerichism, and Agni Yoga.[13]